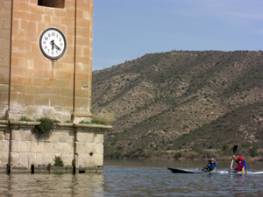 The construction in 1967 of the dam in Ribarroja had the consequence that villages of  Mequinenza and Fayón would be flooded under water.

Leaving the river Matarraña we have the chance to see an unknown Ebro and touc the church tower that still stands in the waters under the watchful eye of the new village church Fayón, up there on the hill.

The fact of navigating a swamp, makes easier the technical difficulty of this route and suitable for everyone. The Ebro rarely has current in here, sailing by canoes in the Ebro is a relaxing experience.

Fayón is located between Mequinenza and Ribarroja de Ebro. The mouth of Matarraña is the administrative border between Catalonia and Aragon.

Although the current Fayón is located on the top of the mountain near the original town was built at the confluence of two rivers (Bugarreig). In fact, our starting point is the river Matarraña and “we leave” to the Ebro.

Once in the Ebro, we will see at the top of the chapel of St. George and from your kayak,  which was at the time the top of the village. But what stands out is the church tower Baroque and Renaissance (XVI) which, over four decades later, is a silent witness of what was a tragedy for this town.

If you want to do the Pales de Sirga in a 5 days tour, this is the best starting point to reach the Mediterranean Sea.

The best from our canoe:

How to find us?

This website uses cookies to improve your experience while you navigate through the website. Out of these cookies, the cookies that are categorized as necessary are stored on your browser as they are essential for the working of basic functionalities of the website. We also use third-party cookies that help us analyze and understand how you use this website. These cookies will be stored in your browser only with your consent. You also have the option to opt-out of these cookies. But opting out of some of these cookies may have an effect on your browsing experience.
Necessary Always Enabled
Necessary cookies are absolutely essential for the website to function properly. This category only includes cookies that ensures basic functionalities and security features of the website. These cookies do not store any personal information.
Non-necessary
Any cookies that may not be particularly necessary for the website to function and is used specifically to collect user personal data via analytics, ads, other embedded contents are termed as non-necessary cookies. It is mandatory to procure user consent prior to running these cookies on your website.
SAVE & ACCEPT